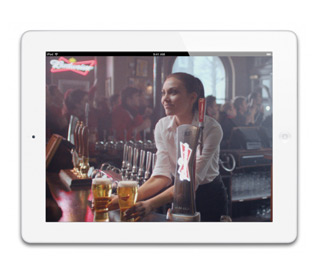 11 June 2013 on Budweiser by hookedesign

AB-Inbev commissioned Hooke Design to create a digital promotional video for a range of products that were being sold in the run up to the Budweiser sponsored FA Cup.

The promotional video was being used in a ‘point of purchase’ advertising pilot campaign being run in 4  Spar stores in the City Centre of Manchester. It was to form part of the ‘Up your game’ campaign. They wanted to take advantage of POP pilot to investigate shopper habits.

The Pilots aim was to investigate whether this type of advertsing technology had a positive effect on product purchases. EPOS data was being collected at the till and part of our brief was to supply the data in the form of info graphics back to the Budweiser Marketing team at Inbev.

Our design team were supplied with the official TV advertising footage which they edited down to compose a 30 second advert promoting 10 bottle packs of Budweiser.

Check out our social media pages...